The USGA’s War on Sandbagging – Part III, We Have Met the Enemy and He is Us


(The United States Golf Association (USGA) has made various attempts to control players who manipulate their handicaps in order to do well in tournaments.  The name for such manipulation is “sandbagging.” If the USGA’s effort can be characterized as a war, then it is not winning.  A series of five posts examines the history and effectiveness of the USGA’s war plan.  Part I details the flaws of the USGA’s earliest attempt at controlling sandbagging.  Part II examines a proposed policy that increased the penalties for alleged sandbagging. Part III argues the current handicap system may actually encourage sandbagging.  Part IV explains why the USGA could be losing the effort to win the hearts and minds of local golfers.   Part V examines the flaws in the USGA's current war strategy. Part VI asks if the USGA's efforts are counterproductive and suggests it may be time for the USGA to withdraw from the battlefield.)
A sandbagger is defined as a player who has artificially inflated his handicap.  As a group, sandbaggers are generally considered both vile and corrupting to the game of golf.  Why do some golfers become sandbaggers?  One theory is based on genetics.  Golfers are descendants of winners since the losers were generally eaten.  A gene-driven insatiable desire to win can only be quenched by getting really good or establishing a phony handicap.  Because of Original Sin, certain golfers—the more slothful—will opt for the phony handicap route and become sandbaggers.  This note puts forth a different theory.  Moderate sandbagging is necessary since the USGA Handicap System does not make for equitable competition.  The USGA is in part to blame for a problem it spends so much effort trying to solve.  To quote Pogo, “We have met the enemy, and he is us.”
What is a moderate amount of sandbagging?  Moderate sandbagging, or more politely termed “rational index supplementation,” is defined as that increase in a player’s index that gives him an even chance at winning a singles match—not of winning the Member-Guest three years in a row.  Moderate sandbagging is necessary for equitable competition because the USGA Handicap System discriminates against the high-handicap player.  Specifically, there are the three elements of the System that penalize the high-handicap player:  1) The bonus for excellence (BFE), 2) Only using a player’s ten best scores out of twenty to compute his handicap, and 3) Equitable Stroke Control (ESC).  The size of the penalty assessed by the three elements is examined in turn.  The concluding section combines these penalties and estimates the number of strokes the high-handicap player must add to his true index for equitable competition.  The number is roughly 9 percent of a player’s index.
The Bonus For Excellence (BFE) –The USGA argues “bonus for excellence is an incentive for players to improve their game that is built into the USGA Handicap System.  It is the term used to describe the small percentage below perfect equity (emphasis added) that is used to calculate a Handicap Index.”[1]  The BFE is currently set at .96.
There are several problems with the USGA’s thesis.  To be an effective incentive, players must be aware of the incentive.  Few players know of this 4 percent reduction in index and the USGA goes to no great lengths to inform them. Like most merchants, the USGA is reluctant to tell their customers they are being shortchanged 4 percent this month.  The USGA hesitancy to promote the BFE can also be attributed to another important problem--the BFE is not an incentive to improve for the vast majority of players.[2]
In most cases, player improvement does not diminish the advantage given to the low handicap player by the BFE.  To illustrate the ineffectiveness of the BFE as an incentive, let’s assume matches between a scratch player and players with various handicaps.  Table 1 presents the perfect equity handicap as defined by the USGA and the handicap using the BFE for players of various skill levels.  If a player’s ten best differentials average 30.0 (Slope Rating = 113), the BFE reduces his handicap by one-stroke.  Assume the player improves to the point where his ten best differentials average 20.0.  The BFE reduces this player’s handicap by one-stroke. In essence, even though he has improved dramatically, he is no better off in his match against a scratch player.  In both cases, he is getting one less stroke than the USGA considers perfect equity.
Table 1 also shows improvement does not improve his competitive position among his fellow high-handicappers.  The difference between the perfect equity handicap(PE) and the bonus for excellence handicap(BE) is the same for all players with an average ten-best differentials between 35.0 and 13.0—i.e., approximately 59 percent of players with a USGA index.[3]
Table 1
Bonus for Excellence Penalty (Slope Rating = 113)

The incentive effect for players with indexes of 12.0 and below is also negligible.  Those with integer 10-best differentials between 0.0 and 12.0 will have identical PE and BE handicaps.[4]  So the only real incentive is for a player to become less than a 12.0 index.  (Note: This limit will vary with the Slope Rating).  For a great number of players this is a difficult, if not an impossible task.  So the BFE is not an incentive for most golfers.  It is simply a penalty assessed to the high-handicap player in competition against low-handicap players.[5]
Basing the Handicap on the Best Ten of Twenty Scores – The USGA bases a player’s handicap on his best ten out of twenty differentials.  The USGA argues it want to measure a golfer’s potential ability and not his average ability.  This is disingenuous.  If the USGA wanted to measure potential it should take the best score out of twenty.  A more likely explanation is the USGA wanted to give an edge to the low-handicap player.  By only using the better half of a player’s scores, an advantage goes to the player who is more consistent or in statistical parlance has a smaller variance in his scoring. The players who are steadier are, most likely, the low-handicap players.
Here is an example of how it works.  Assume Player A always plays to the Course Rating (i.e., his handicap is 0).  Assume the scores of Player B have probability distribution shown in Table 3.
Table 3
Scoring Probability Distribution of Player B

It should be noted that Kupper did not examine actual matches.  He examined the standard deviations of a sample of players, calculated the biased USGA handicap differential, and predicted a winner based on the normal distribution table.  In other words, Kupper predicted who should win, not who does win.
The empirical question is “Does the high-handicap player lose about a third of the time?”  Casual observation indicates he does not.[7]  A player who loses a third of the time either quits playing matches and/or adjusts his handicap to make for equitable competition.

Equitable Stroke Control – As discussed in a previous post,[8] changes in the ESC procedure have greatly reduced the discrimination against the high handicap player. Under the new procedure, a player’s average adjusted score is about .5 strokes lower than his average score. There appears to be no disparate impact by handicap. Therefore, ESC cannot be considered a motivation for moderate sandbagging and is eliminated from further discussion.

Moderate Sandbagging Defined - What is the size of the adjustment to ensure equitable competition?  The size can be estimated both empirically and theoretically.

Empirically – A straightforward method of estimating the bias in the handicap system is to plot the average differential versus index for a sample of players.  The slope of the regression line through the data is the estimate of the bias moderate sandbagging must overcome.  An example of this method is shown the figure below.[9] 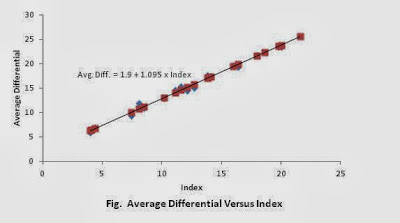 The slope of the regression line through the data was 1.095.  The difference in average differentials between players with a difference in index of 10.0 would be approximately 1-stroke.

The adjustment can be represented in equation form by:[13]

Since the player must also adjust his true index by 4 percent to account for the BFE, the final adjustment equation becomes:

For example, if a player’s true handicap differential is 20.0, he needs to adjust his index upward by 1.8 for equitable competition.

Both the empirical and theoretical methods yield the approximately the same estimate of bias—9 percent.  Does this give a player carte blanche to inflate his index in the name of equity?  It does not.  Equity could only be achieved if every player increased his/her handicap by 9 percent.  This is not likely.  If only one player inflates his handicaps and competes with players with like handicaps, then he becomes the sandbagger.  This, of course, should be avoided.
To win the hearts and minds of golfers in the war against sandbagging, golfers of all types must be convinced they are being treated fairly.   The USGA Handicap System, however, discriminates against the high-handicap player.  It is clear that this inequity gives some players extra motivation to inflate their handicaps.  This extra motivation may be small in comparison to other factors such as greed.  To minimize the motivation, however, the USGA should make the Handicap System fairer.  The first step in moving toward this goal would be to eliminate the Bonus for Excellence. The USGA’s War on Handicapping – Part IV, examines the history of the Handicap System to estimate whether movement toward a more equitable system is likely.


[1] The USGA Handicap System, 2012-2015, USGA, Far Hills, NJ, p. 77.
[2] Dean Knuth, former Director of Handicapping for the USGA is more forthright about the purpose of the BFE. He writes “Historically, the USGA wanted to reward the accomplishments of better players…For a six-stroke difference in handicaps the better player gains a one-shot advantage (due to the BFE) and should win 60 percent of the matches. See www.popeoflope.com/magazine/bonus_for_excellence.
[3] Men’s USGA Handicap Index Statistics, www.usga.org/articles_resources?Men-s-USGA-Handicap-Indexes.
[4] A player A 7.8 index will have a PE handicap of 8 and a BE handicap of 7.  If he improves to 6.8 he is still has a BE handicap of 7.0.  If he adds one-stroke to his ten best scores, he becomes a 7.9 index and has a BE of 8. In essence, he has a disincentive to improve.  This is due to the necessity for rounding to integer handicaps, however, and is not a result of the BFE.   Check thsi
[5] The effectiveness of the Bonus for Excellence is examined in more detail in Dougharty, Laurence, “The USGA’s Bonus for Excellence” Ruse, www.ongolfhandicap.blogspot.com, 2013.
[6] Kupper, Lawrence L., et al., “Is the USGA Golf Handicap System Equitable?”, Chance, Vol. 14, No. 1, pp.30-35.
[7] When Scheid took scorecards and simulated matches, he found a 90 percent allowance was fairest for four-ball stroke play (See Ewen, Gordon, “What the Multi-ball Allowances Meant to You-1978,” USGA.org/handicapping/articles). In an examination of actual competition, Dougharty found the 90 percent allowance was probably too high (See “Handicapping Four-Ball Stroke Play Events-1997,” Ongolfhandicaps.blogspot.com).  This would indicate players have adjusted their handicaps (in some cases by too much) to make for equitable competition.
[8] What a Difference an ESC Makes, March 7, 2013, www.ongolfhandicaps.blogspot.com.
[9] Ibid.
[10] Scheid, F.J., The search for the perfect handicap, ”Science and Golf II: Proceedings of the World Scientific Congress of Golf, Edited by A.J. Cochran and M.R. Farrally, E&F Spon, London, 1994, p. 224.
[11] See, Scheid, F.J., “On the normality and independence of golf scores, with various applications,” in Science and Golf : the Proceedings of the First World Scientific Congress, Rutledge, Chapman, and Hall, London, 1990, pp. 147-152.
[12] Kupper, op. cit., p. 33.
[13] A coefficient of the handicap index of .0534 would indicate a greater level of accuracy than exists.  Therefore the coefficient is rounded to .05
Posted by Laurence Dougharty at 11:37 AM