From time to time the USGA and regional golf associations publish articles explaining the USGA Slope System.  More often than not, the articles get it right.  On too many occasions, however, the articles demonstrate a lack of understanding of the Slope System.  Such articles tend to confuse rather than inform their readership.  The latest example comes from Fore Magazine, the publication of the Southern California Golf Association (SCGA).[1]  The article is entitled “Slippery Slope: Comparing Course Difficulty” and was written by Doug Sullivan, the Director of Course Rating for the SCGA.  The article contains three major errors.  First, the suggested criterion for measuring course difficulty is not adequate for many situations.  Second, the article incorrectly describes how the Slope Rating is determined.  Third, the article’s explanation of why a player gets more strokes is not consistent with the theory behind the Slope System. Each error is reviewed in turn
.
Error No. 1 – Misleading advice on measuring course difficulty
Sullivan follows in the footsteps of several other articles that claim the Course Rating is the dominant criterion for ranking courses by Course Difficulty.[2]  Sullivan is more adamant, however, and claims the Course Rating should be the sole criterion is measuring course difficulty.  He writes:

… Slope Ratings should not be used to compare the difficulty of different golf courses.  Instead a Course Rating is generally a better indicator in determining the difficulty of one course compared to another.

So the next time someone asks you which course you think is more difficult, compare the Course Ratings, not the Slope Ratings.  Not only will your answer be more accurate, but your friends will be more than a little impressed with your knowledge of SLOPE.

Sullivan is wrong.  While the Course Rating may be the dominant factor in measuring difficulty, it is not the only factor.[4]  If the definition of difficulty shown above is accepted, then:

Since Sullivan did not acknowledge the importance of Index and Slope Rating in determining difficulty, his knowledge of SLOPE should not impress his friends.  Moreover, though left unstated in Sullivan’s article, course difficulty will vary by a player’s characteristics (hooker, slicer, short hitter, etc.).  If you really want to determine which course is more difficult, you should play them and draw your own conclusion.  To try to determine the most difficult course solely by USGA Ratings that are prone to error will only yield answers of little reliability and even less consequence.

This is the type of graph (shown below) that is created to compare scores of golfers of different abilities.  As you can see, scores increase as a player’s Course Handicap increases.  A line is created to connect as many scores as possible.  The steeper the line, the higher the Slope Rating.  The flatter the line, the lower the Slope Rating.  The concept of SLOPE simply refers to the slope of this line – that bit of trivia should help you make a few bucks on your next friendly bet. 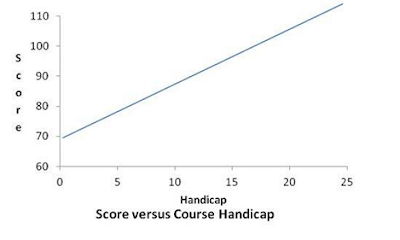 Sullivan is simply wrong.  Since the advent of the Slope System, the slope of the line relating average scores to handicap is the same for all courses.  After all, that was the purpose of the Slope System. To be correct the horizontal axis in Sullivan’s graph should have been labeled Handicap Index and not Handicap.[5]   If you followed Sullivan’s advice and placed a bet—you lost!

Error No. 3 – Confusing the reader on how Course Handicaps are determined
In trying to explain how and why the Slope System assigns additional strokes, Sullivan writes:

So why do articles such as Sullivan’s continue to be published?  It’s probably because neither the SCGA in this case nor the reader are sticklers about accuracy.  The SCGA is looking to fill its magazine and assume the Director of Course Rating must know what he is talking about.   And if he doesn’t, it doesn’t really matter.  SCGA members can be divided into three groups.  The first will pass on any article about the Slope System so the image of the SCGA will not be harmed.  The second group will assume the article must be accurate since it came from the experts at the SCGA.  The third group that recognizes the article as nonsense is a very small subgroup of the SCGA membership (i.e., approximately 1) that can easily be dismissed.

[1]Sullivan, Doug, “Slippery Slope: Comparing Course Difficulty,” Southern California Golf Association’s Fore Magazine, Spring 2017, p. 94.
[2]Cowan, Jim. “An Explanation of Slope,” Northern California Golf Association website, ncga.org.  Metropolitan Golf Association, “How do the Course Rating and Slope numbers affect my Handicap Index?” mga.org.
[3] It is not clear why the authors of these articles have chosen peculiar Course and Slope Ratings to make their point.  Jim Cowan of the Northern California Golf Association, for example, used a course with a Course Rating of 72.8 and a Slope Rating of 114.  Since Course Ratings are highly correlated with Slope Ratings, it is very likely such a course does not exist.  Real courses could have been selected to demonstrate how difficulty is measured, but no author has taken that path.
[4] Cowan, loc. cit.
[5] Stroud, R.C. and L.J. Riccio,  “Mathematical Underpinnings of the slope handicap,” Science and Golf, E & FN Spon, London, 1990, pp. 129-140.  Stroud shows the Perfect Valley Handicap as the label for the horizontal axis.  The Perfect Valley Handicap is a player’s Handicap Index.
Posted by Laurence Dougharty at 10:42 AM No comments: