(Note: This is a corrected version of a post of the same name from 2012.  The previous post omitted the Appendix.  The Appendix is shown in this version)


This paper evaluates two methods around this problem:


The foursome has 81 different scoring combinations as shown in Table A-1 of the Appendix.  Each combination has a team score and a probability of occurrence.  The expected score is the product of the team score and the probability of occurrence summed over all outcomes.  The expected two-best ball score of the foursome is 1.11.

2. An Empirical Test - The selection of the best method will depend upon the player’s probability function at a course.  The probability function was estimated for two courses using the same 88 players.  The net scores for each player were sorted into five categories as shown in Table 2.  The estimated probabilities are the number of hole scores in each category divided by the total number of hole scores.  These probabilities are presented in Table 2.

Table 2 shows there is a significant probability that a player will have a net score of 2 over par or more.  The three-score model (0,1,2) used here does not take into account such high scores.   To have a score of two over par used in a foursome event, however, three players must have that score.  The probability of that outcome is small, so the bias introduced by the three-score model should not be large.


To evaluate the expected scores under each scoring alternative, the probabilities of 2 under and over are combined with the probabilities for 1 under and 1 over, respectively, as shown in Table 3.   (Note: Par is considered “1” in the three-score model.)


These probabilities result in the expected hole scores shown in Table 4 for each method.


The table demonstrates the preferred method depends on whether a course is relatively easy or difficult.[1]  When net bogeys are likely (i.e., P(2)=.4 or .3) Method 2 is the most equitable format for threesomes.   On an easier course (i.e., P(2)= .2 or .1), Method 1 yields an expected score closer to the foursome expected score and would be the preferred format.


Realistically, courses where Method 1 is preferred are rare.  The expected net score of a player with 4th probability distribution, for example,  would be 5.4 under par.   This would imply that the course rating is approximately 9 under par.[2]   A review of the golf courses in Southern California found no golf course with such a wide disparity between par and the course rating. [3] 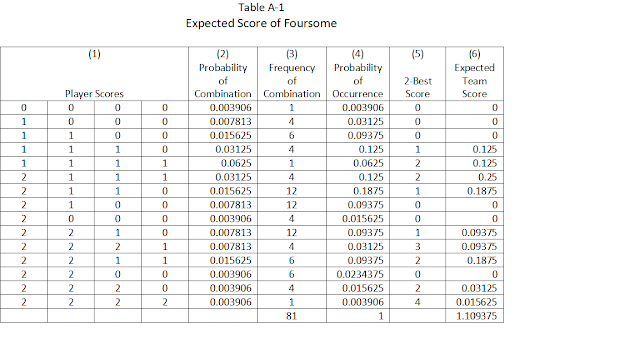 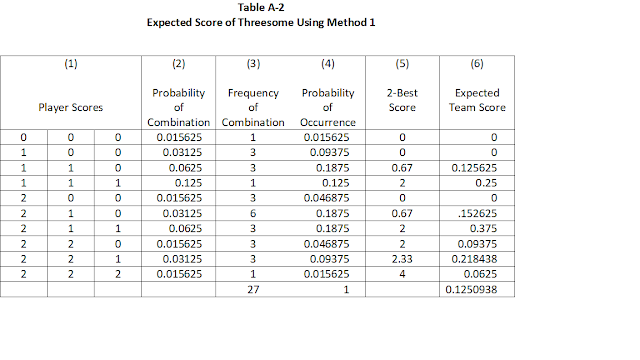 Under Method 2 the probabilities stay the same but the 2-Best Scores are slightly different.  Having a guaranteed par on a hole reduces the size of a bad hole score.  The expected score under Method 2 is 1.28. 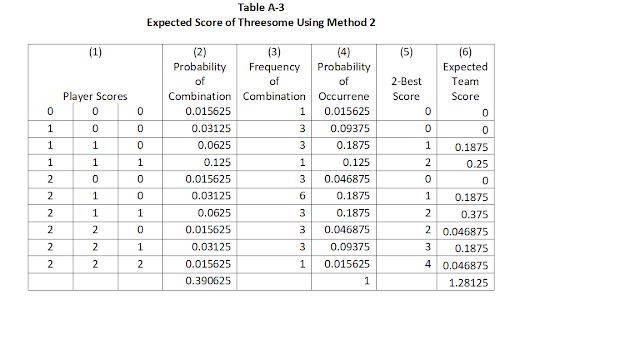 How Will the World Handicap System Affect Your Index?


A player’s Handicap Index is based his adjusted scores and the Course and Slope Ratings.  The USGA Course Rating is based on a model which predicts the better half of scores of the 288 competitors in the U.S. Amateur Championships.  The Bogey Rating is equivalent to the average of the better half of a bogey golfer’s scores under normal playing conditions.[1]  Under the World Handicap System (WHS) that will become effective January 1, 2020, however, a player’s Handicap Index will be based on the better 40 percent of a player’s differentials (i.e., best 8 of 20).  The size of any reduction in a player’s Handicap Index depends on whether the Course and Slope Ratings are changed to reflect the drop in the number of best scores used—i.e., the current Course Rating is an estimate of the performance of a scratch handicap when his best 10 scores are used and not his best 8 scores.

Under the WHS, the Bonus for Excellence is eliminated.   The player's WHS Handicap Index is:

The change in the player's Index when the WHS is implemented is:


Estimated Change in Handicap Index Under the World Handicap System


A typical player’s reaction to all of this might be “Whatever.”  There are other changes in the offing--e.g., playing handicap, reduction for exceptional performance. These changes will be examined in future posts.


Similarly, if the average Bogey player has a standard deviation of 4.0 strokes, the Bogey Rating should be reduced by 0.6 strokes.


The men’s revised Slope Ratings will then be: