The World Handicap System (WHS) has been in effect for about a year.  If the WHS was a product, the manufacturer would be examining if it made handicaps more equitable, more accurate, and easier to use.  If history is any guide, golf's governing bodies are not making such an effort. Without the data within GHIN, independent analysis of the WHS cannot be undertaken.  It is possible, however, to theorize about the efficacy of any Rule.  This post examines Rule 5-8 Limit on the Upward Movement of a Handicap Index.  It recommends eliminating the Soft Cap  and adopting a simple  Hard Cap.  If the Soft Cap is to be kept, editorial changes are suggested to make the it more understandable and transparent.

Eliminating the Soft Cap - Rule 5-8 limits the upward movement of a Handicap Index by employing Soft and Hard Caps.  The Soft Cap is triggered when a player’s calculated Handicap Index is 3.0 or more above his Low Index of the year.  The value above 3.0 is restricted to 50% of the increase.  There does not appear to be empirical evidence justifying the Soft Cap.  The adoption of this Soft Cap was probably based on two reasons.  First, it made the WHS complicated and to many players it would imply validity.  Second, since the WHS eliminated any handicap controls based on tournament performance,  the Soft could be defended as the WHS effort in controlling sandbagging. Neither argument is convincing.

The Soft Cap would not be an effective instrument in controlling sandbagging..  The astute sandbagger  knows how to maintain his Low Index and will not let it drop due to a series of good scores. The Soft Cap, however, can ensnare the honest player.   Relatively modest increases (a region between +3.0 and +4.0) in a player's Index can be caused by random variations in scoring, slumps, changes in playing conditions (e.g. summer versus winter), and by a player manipulating his scores.  Anecdotal evidence suggests, a large percentage of Soft Cap reductions in this region are due to causes that should not be penalized.  Therefore, the Soft Cap will ensnare the honest player  and not advance the equity of competition.

The Table below shows a player's reduced Index under the WHS compared to only having a hard cap of 5.0.  There are two regions of interest.  For increases in Index between 3.0 and 4.0 there is only a minimal effect on a players handicap-- zero to one-stroke.  This is the rregion where the honest play will most likely to be penalized.  Adopting the 5.0 Hard Cap would eliminate this inequity.

For increases in Index from 5.0 and on up, a Hard Cap of 5.0 leads to a slightly smaller reduction than the application of the Soft Cap.  For example if a player had a calculated Index increase of 6.0 the difference between the Soft Cap and Hard Cap reduction would only be 0.5. That is the Hard Cap is almost a severe a penalty on those players most likely to be manipulating their Index.  In essence, the Soft Cap under Rule 5-8 can be replaced by a simple Hard Cap of 5.0 with no significant effect on equity.

Under the Soft Cap a player can have an increased Index of 7. before reaching the Hard Cap comes into play.  Statistically such an  increase is so rare it should come to the attention of the Handicap Committee.  This was done under the old Golf Australia Handicap System.  That system  had a 5.0 Hard Cap, but it was but the authority to impose the Hard Cap was given to the Handicap Committee and not a WHS computer.  Data from  Golf Australia should be used to see if the simpler 5.0 Hard Cap worked sufficiently well that the Soft Cap can be eliminated from Rule 5.8. 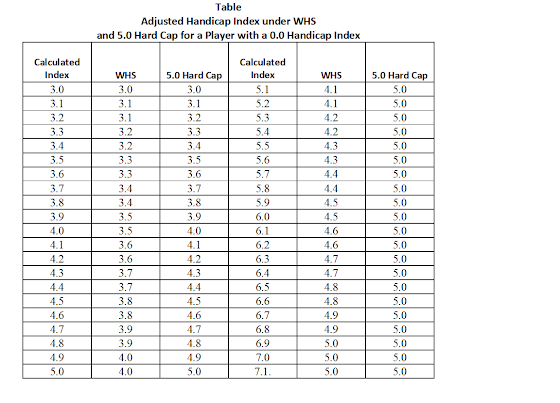 Notification of Reduction - Under the previous USGA Handicap System, a reduction in Index was signified by placing an "R" next to the player's Index.  Under the WHS, a player is not notified of a cap reduction with similar clarity.  The WHS places a small icon "!" next to a player's Index.  If the player notices the icon and clicks on it, a message will appear stating a cap reduction has been applied.  The player is not informed of the size of the reduction, however.  This lack of transparency could prevent a player from appealing the reduction to the Handicap Committee if he believed it unjust.  The WHS should follow the basic tenet of a good handicap system by fully informing a player about his reduction in Index. This will allow players to provide feedback on the perceived value of the soft cap in ensuring equitable competition.

Rounding - Rule 5-8 does not detail how the 50% reduction is calculated.  For example, if the increase is 1.3, Rule 5.8 prescribes a 0.65 reduction to a player’s Handicap Index.  The Rule is silent on whether this reduction should be rounded up (0.7) or rounded down (0.6).  From a sample of scoring records, it appears the WHS rounds down.  This should be made explicit when Rule 5-8 is revised.

All of this assumes there will be a revised WHS.  The USGA and R&A have not indicated any timetable for revising the WHS.

Posted by Laurence Dougharty at 10:16 AM No comments: