Should a Club Adopt the Local Rule on Lost and Out-of-Bounds Balls?

In the new Golf Rules for 2019, the USGA will permit committees to adopt a local rule on Balls Lost or Out-of-Bounds:

Balls Lost or Out-of- Bounds: Alternative to Stroke and Distance: A new Local Rule will now be available in January 2019, permitting committees to allow golfers the option to drop the ball in the vicinity of where the ball is lost or out of bounds (including the nearest fairway area), under a two-stroke penalty. It addresses concerns raised at the club level about the negative impact on pace of play when a player is required to go back under stroke and distance. The Local Rule is not intended for higher levels of play, such as professional or elite level competitions. (Key change: this is a new addition to support pace of play.)

This local rule should pass three tests before it is adopted by a club.  First, is it needed?  Second, does it actually increase the pace of play?  Third, is the cost of administering the rule worth any perceived benefit?

Need – Typically, local rules should only be adopted when abnormal conditions make it impractical to abide by the Rules of Golf.  Examples would be prohibiting play from environmentally sensitive areas, allowing the removal of stones from bunkers, and allowing preferred lies.  This local rule does not meet the requirement of abnormal conditions and is promoted solely to increase the pace of play.  If a ball being hit out-of-bounds or lost is a common occurrence, then the local rules would pass the needs test.  If not, this local rule is a worthless addendum to the rules sheet.

This local rule will come into play primarily in singles stroke play events.  In match play or better-ball events a player who believes his ball is out-of bounds will usually play a provisional ball (more on this later).  If he does not, and finds his ball out-of-bounds, he often does not go back to the tee, but disqualifies himself from the hole.  In either of these cases, the local rule is of no use.

There are courses where balls can be easily lost.   The new rules permit the committee to declare areas where balls can easily be lost (e.g., gorse, woods, and raw desert) penalty areas.  If many lost balls are now in what can be considered penalty areas, the need for this local rule is greatly reduced if not eliminated.

Pace of Play – The USGA argues this local rule would increase the pace of play.  There are counter arguments that contend it will not increase, and possibly decrease, the pace of play.  A player who finds his ball out-of-bounds still has the option to return to the tee.  For example, assume a player hooks his ball out-of-bounds on a par 3 hole.  He finds it (Point A on the figure below) some 60 yards from the hole.  He can now drop the ball on the fairway 60 yards from the hole and be hitting four or return to the tee hitting three.  After a few minutes of calculating his odds of making a five, he decides to re-tee.  In this case, the new local rule actually decreases the pace of play. 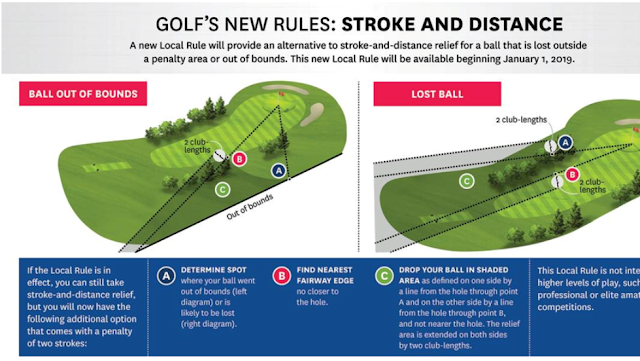 While some of the new rules are intended to diminish conflict among competitors, this local rule does not.  The question of whether a player hit the ball twice, for example, does not need be resolved under the new rules.  This local rule, however, can lead to disagreements among competitors.  Assume a player hits the ball out-of-bounds on long par four.  The ball is not found, but all participants’ believe the ball went out-of- bounds.  The player who hit the ball believes the ball traveled twenty yards further than his opponent believes.  The Committee is called and it decides that without any contrary evidence, the player’s judgment should prevail.  The player drops his ball at point B.  His opponent argues the ball is now closer to the hole than point A.  Both players draw their range finders and conclude the ball must be dropped five yards further back.  In this case, the local rule increases both the time of play and the enmity among players.

There are also cases where the local rule is difficult to apply.  One example would be when a player’s ball is out-of-bounds behind he green.  A player must first estimate how far the out-of-bounds boundary is from the flagstick (i.e., Point A).  Then he may have to walk back to the fairway to find the nearest point no closer to the flagstick (i.e., Point B).  The player now has a large swath of “general area” created by an arc connecting Point A and Point B.   If the player takes anytime deciding the best place to drop, the local rule will not increase the pace of play.

Another example would be on a hole with a sharp dogleg to the right.  If a player hooks his ball, there could be no Point B that is not closer to the hole.  The USGA suggests in such cases:

If a ball is estimated to be lost on the course or last crossed the edge of the course boundary short of the fairway, the fairway reference point may be a grass path or a teeing ground for the hole being played cut to fairway height or less.

If a player goes back to a tee (either the one played from or a forward tee) under the local rule, he would be hitting four without a tee.  A better option might be to abandon the original ball and be hitting three with a tee.  Again, the local rule does not increase the pace of play.

This local rule option is not available if the player hits a provisional ball.   A player is well advised not to hit a provisional ball, but proceed to the out-of-bounds ball and analyze his options.  If he finds, for example, his Point B is further from the hole than his typical drive, he can then return to the tee and hit his third stroke. Again, whether this local rule increases the pace of play is questionable.

Cost of Administration – Members at clubs will eventually understand the geometry of this local rule if it is adopted.  Visitors unfamiliar with the rule could struggle.  The club could publish a lengthy rules sheet explaining how to determine Points A, B, and C.  Such a sheet is unlikely to be read and would obscure other local rules that are more likely to come into play.

Clubs have the option to suspend this local rule for some tournaments.  If the rule is not suspended for the club championship, players could be insulted that their tournament is not a “higher level of play.”  If it is suspended the Committee must make sure the suspension is included on the tournament rules sheet.  The "on again off again" nature of a local rule leads to confusion and should be avoided.

These are not large administrative problems.  A club must assess whether even these minor hassles are worth the limited benefit of the local rule.

Conclusion – The USGA’s objective was to make the game simpler and faster for the recreational player.  This local rule will not meet these two objectives at most clubs.  The local rule is not simpler than having a player hit a provisional ball.   And if the Committee is worried about the pace of play, it has better weapons in its arsenal such as conducting tournaments with Stableford scoring.

Another argument against the local rule is it violates the principle that everyone plays by the same rules. The USGA followed this principle when it allowed all golfers, regardless of ability, to drop outside of a bunker with a two stroke penalty.  To be consistent, the USGA could have made the relief procedure in this local rule an alternative to stroke and distance relief found in the Rules of Golf.   It did not.  It could be the USGA believed the local rule option would affect the equity of the game by favoring the long hitter.  Or it could have believed having Tiger Woods drop a ball in the fairway after an out-of-bounds shot would be too big a departure from the history and traditions of the game.

While this local rule looks like it should be rejected on its merits, many clubs will adopt it merely because it comes with the imprimatur of the USGA.  This will allow for an evaluation of the local rule based on empirical evidence and not the speculation.  Any comments by readers on how this rule works in practice would be greatly appreciated.