The Selling of the USGA’s Slope Handicap System: The Big Con?

Introduction and Summary - The USGA has sold the Slope Handicap System as the solution to the portability problem.  By measuring the “slope effect” a player’s handicap will be adjusted to reflect the difficulty of any course and equity will be achieved.  The USGA, however, has never proven the existence of the slope effect nor demonstrated it could measure it with any accuracy.   If the Slope Handicap System was a consumer product, the Federal Trade Commission would step in and demand proof of the USGA’s claim before the Slope System could be marketed to consumers.  Sadly, the USGA is an unregulated monopoly and can do pretty much what it wants—no questions asked.

This limited study found it is likely there is a slope effect, but it only explains a small percentage of the variance in a player’s scoring differentials.  The slope effect does increase with a player’s Index as Slope Theory would predict.   A player’s index, however, does not explain much of the variance in the marginal effect of the Slope Rating on a player’s scoring differentials (i.e., the Slope Rating is not a perfect indicator of the difficulty of a course for player’s of the same Index).  Attributes of an individual’s game (e.g., tendency to slice, distance of the tee) probably explain more of this variance than the player’s Index.
There are two conditions that can negate the effect of the Slope System.  First, if a player plays courses with a narrow range Slope Ratings, the Slope System will not have a significant effect on the player’s handicap.  Second, if a player competes against players with about the same Index, the Slope Rating will not have much effect on the equity of competition.  The efficacy of the Slope system depends upon those conditions not being met.  How often that occurs is an empirical question beyond the scope of this study.

Why does the Slope System which has only marginal benefits sell so well?  There are probably three reasons.  First, it has intuitive appeal to golfers who believe there are courses where they deserve more strokes.  Second, it sounds like it was developed with scientific rigor and is therefore credible.  And third, since a player’s index is typically lower than his pre-Slope Handicap, the Slope System caters to his vanity.   The estimate of a player’s handicap is so riddled with errors that tacking on the Slope System will not do any harm or make for a significant increase in equity.  An analogy for the introduction of the Slope System is “putting lipstick on a pig.”  It looks good, but the results are pretty much the same.

Where є is the random error.

If there is a strong slope effect, the estimate of the coefficient “b” will be positive and statistically significant.  To estimate the coefficient with any validity would take a large random sample of players.  Since such a study is not practical for researchers outside of the USGA, a much smaller study was undertaken to 1) demonstrate the methodology, and 2) get some hint about the existence of the slope effect.  The small study consisted of the scoring records of handicap administrators and golf journalists, .  Each player in the sample was required to have played courses with a range of Slope Ratings. The sample is detailed in Table 1.

Equation 1 was estimated using the scoring records of each player.  The estimates of “b” for each player are shown in Table 1.  For 11 of the 14 players sampled, the estimate of “b” was positive and therefore consistent with Slope Theory.  The estimate of “b”, however, is only statistically significant at the 5 percent level of confidence for two players. 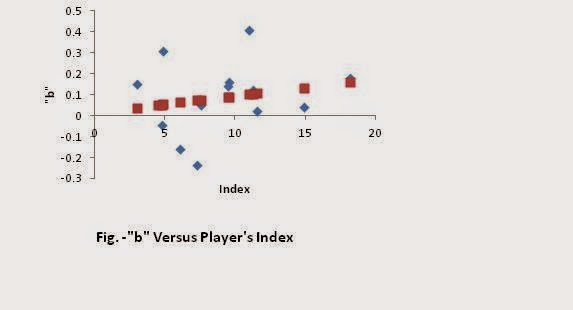 To estimate the coefficients C and D, the values of “b” shown in Table 1 were regressed against the player’s Index. The estimated regression equation was:

Equation 5) is an empirical test of the validity of the assumption behind the Slope System as represented in equation 3).  In Slope Theory, the constant C should be zero.  The estimate of C is .01, but is not statistically different from zero.  The theoretical value of D should be .01 as shown in eq. 3.  The estimated value of D is .008.  The estimated value of D is close to the theoretical value, and is statistically significant (i.e., the hypothesis that the true value is .01 cannot be rejected with a 5 percent level of confidence.).

The Figure below shows the plot of the regression line and the values of “b”.  As the figure indicates, a player’s Index does not explain much in the variance of “b”—i.e., the values of “b” are not clustered close to the regression line.  The value of R2 for this equation is only .04.  This indicates there may be a large random error associated with each player’s “b.”   The Slope Rating is for some average player, but the true Slope Rating for an individual player may vary by his particular playing characteristics.

With such a small and unscientific sample as used here, no final conclusions can be drawn.  It appears the slope effect is an increasing function of a player’s handicap, but does not explain a major part of the variance in the marginal effect of the Slope Rating.

Does the Slope Effect have a significant impact on a player’s handicap?   Table 2 (column 3) below shows the player’s handicaps computed without the Slope Rating of a course (i.e., his or her pre-Slope handicap).  Column 4 shows the range of Slope Ratings where a player’s Slope adjusted handicap would be the same as his pre-Slope handicap.  Column 5 presents the percentage of the 20 courses in a player’s scoring file where his Slope Adjusted handicap and his Old Handicap were the same.   The percentage will vary depending upon a player’s index and the variance in the Slope Ratings of the courses played.  The higher a player’s index, the smaller the range of Slope Ratings that will make the two handicaps equal and therefore the greater the chance that a Slope Rating will fall outside of this range.  If a player has a small range in the Slope Ratings he encounters, the two handicaps are more likely to be equal.  In no case, however, did a player’s pre-Slope Handicap differ from his Slope Adjusted Handicap by more than one stroke.

Why does the Slope System Sell so Well? -  The Slope System was adopted in the United States with no serious opposition.  It has now spread to many more countries.  There are a few notable holdouts, but they may go the way of the Betamax as the drive for a universal handicap system gains momentum.  There are probably three reasons for its acceptance.  First, it has intuitive appeal to golfers who believe there are courses where they deserve more strokes.  Whether the Slope Rating is an accurate measure of how many strokes they should receive is not questioned.  If they get more stokes, this group is satisfied.

Second, it sounds like the Slope System was developed with scientific rigor and is therefore credible.   The ubiquitous “113,” gives the illusion of precision, though in reality it was just a number picked out of the air.    And third, since a player’s index is typically lower than his Old Handicap, the Slope System caters to his vanity.  For example, a player is no longer an 11 handicap, but a 9 index.  The 9 index sounds like a better player than an 11 handicap to the uninitiated though they are in fact equivalent.

The estimate of a player’s handicap is riddled with errors.  The USGA Handicap System contains many self-admitted biases.  There is sampling error in using only twenty scores.  The handicap estimate is also a lagging indicator of a player’s current ability.  There are numerous rounding errors made in the calculation of a player’s index and his subsequent course handicap.[4]  There are errors in the estimates of the Course and Slope Ratings that in turn lead to errors in the estimate of a player’s handicap.  Then there the errors caused by the dubious character of some players (sandbaggers).  So tacking on the Slope System will not do much harm or bring a significant increase in equity.  Incorporating the Slope System into the existing Handicap system is like “putting lipstick on a pig.”   It looks good, but the results are pretty much the same.

[1] If you are a player with a plus index, your differential should be negatively related to the Slope Rating.  This is an anomaly of the Slope System explained in Dougharty, Laurence, “Why the Slope Handicap System Doesn't Work for Plus Indices, www.ongolfhandicaps.com, August 26, 2012.
[2] The accuracy of Slope Ratings is examined in Dougharty, Laurence, “How Accurate is the Slope System,” www.ongolfhandicaps.com, October 8, 2012.
[3] Stroud, R.C., and L.J. Riccio, “Mathematical underpinnings of the slope handicap,” Science and Golf, The Proceedings of the World Scientific Congress of Golf, E.FN. Spon, London, 1990, pp. 135-140.
[4] If Player A (Index=8.9) played Player B (Index=5.1) at a benign course with a Slope Rating of 121, Player A would get 5 strokes. If the course had a Slope Rating of 146, Player A would only get 4 strokes.  Rounding produces this result which is contrary to the philosophy of the Slope System that supposedly aids the higher-handicap player on courses with a higher Slope Rating.