The USGA Bogeys Its Explanation of the Slope System

Previous posts (e.g., see The Mathematical Underpinnings of the "New" Slope Rating, February 4, 2013) have documented the confusion at the USGA about the Slope Rating.  This post takes another whack in the spirit of flogging a dead horse.  Let’s start with documenting the USGA’s arguments as put forth by Dean Knuth, former USGA Director of Handicapping:


The USGA coined the term which numerically describes the difference in course rating difficulty between the bogey and scratch players as the “Slope Rating.”…Slope Rating is the slope of the regression line of total score versus USGA Handicap for a particular golf course.  The Y-intercept is the USGA Course Rating which is the better half of score average of scratch golfers… The slope of the scores line of an average course has been observed to be 1.13 and the USGA Slope Rating is referenced as 113 to deal with whole numbers.  A scratch golfer will score proportionally fewer strokes than a 10, 20, and 30 handicapper.  The slope of the line through their score indicates the difficulty of the course, and the slope is steeper for more difficult courses and less steep for a less difficult course.[1] (Note: USGA Handicap refers to a player’s handicap before the introduction of the Slope System).


A minor error is that Knuth uses the regression line of “total” score versus USGA Handicap.  He probably meant to use “average” score as shown in the work of Stroud and Riccio.[2]  (The term “total” score has no obvious meaning, so “average” score is substituted for the purposes of this post.)  The larger error is the assertion that the slope of the regression line of average score versus USGA Handicap will be the Slope Rating.  This is not the case.  The slope of this regression line at any and every course should be 1.13 if Stroud and Riccio are correct.


Why isn’t the slope of the regression line steeper at more difficult courses as Knuth maintains?  The answer is straightforward.  If a player only plays his home course, his handicap is independent of the Slope Rating.  The relationship between average score and USGA Handicap is only a function of the procedures for reducing an average score to produce a handicap (i.e., taking only the ten best scores out of twenty, equitable stroke control, and the 96 percent factor).


Several conclusions can be drawn from this critique of USGA research:


1. The research papers appear to have been dashed off in order to qualify for a conference at St. Andrews in July of 1990 (e.g., greek symbols were entered by hand).  I suspect the authors were more concerned with locking down their tee times on the Old Course than quality control.  Why else would members of the USGA Research Team (Knuth, Riccio, and Stroud) arrive at such disparate reasons for the ubiquitous number 113 that pervades the USGA Handicap System?


2. The Conference editors (Cochran and Farrally) should have been responsible for the quality of the papers presented.  They overlooked this duty, probably for monetary reasons.  I suspect the USGA, a major financial sponsor of the conference, could have submitted the menu from Rusack’s Hotel and it would have been accepted.


Well that’s enough flogging for now. The next post will examine the difficulty in empirically verifying Course and Slope Ratings.

What a Difference an ESC Makes


Introduction - A previous post detailed the various equitable stroke control procedures (ESC) implemented by the United States Golf Association (USGA) over the past twenty years--See What Does the Equitable Stroke Control Procedure Mean for Golf? February 13, 2013.  This post presents an analysis of the impact of different ESCs on handicaps and the overall equity of competition.  A simulation model was used to estimate the effects of different ESCs on adjusted scores and handicaps.  It was found that the latest ESC (ESC97) reduced the advantage of the low-handicap player over the high handicap player.  This conclusion was affirmed in an empirical test using a small sample of players.


Simulation Model - The first step in creating the simulation model was to estimate the probabilities of hole scores relative to par for golfers of varying ability.  These probabilities were estimated first by drawing from a small sample of scorecards, and then reviewing and adjusting these estimates after discussions with numerous players.  The results are dependent on these estimates.  The overall conclusions of this analysis, however, were found to be fairly insensitive to moderate changes in the estimated probabilities.  The probabilities for a low-handicap (5-handicap), a medium-handicap (15-handicap) and a high-handicap (25-handicap) are shown in Table 1.
Table 1
Probability of Hole Score Relative to Par


Each player had 1000 simulated rounds. His score was adjusted after each round under the three ESC formulas: 1) OLDESC, 2) ESC93, and 3) ESC97.  The players’ average score and adjusted scores are presented in Table 2.
Table 2
Average Scores


Comparing handicaps under the OLDESC and ESC97, the low-handicap player lost approximately .6 stroke advantage in handicap to both the medium- and high-handicap player.


One measure of over-all equity is the difference between a player’s average differential (average score - course rating of 70,0) and his handicap. These differences are shown in Table 4.

As Table 4 indicates, the low-handicap player has a handicap closer to his average differential, and therefore has an advantage over the medium- and high-handicap player.  ESC97, however, has reduced the size of the advantage.  The relationship between average differential and handicap can be represented in equation form for each ESC procedure:[1]


The equations show the adoption of ESC97 decreased the penalty against the higher handicap player by 3 percentage points.


Empirical Test - To test if the results of the simulation model  are confirmed by real world results, a sample of 21 golfers was used. This sample was not random.  It consisted of players known to the author and celebrity players such as John Paul Newport, golf columnist of the Wall Street Journal, George Peper, former editor of Golf Magazine, and Dean Knuth, former USGA Senior Director of Handicapping.  The average differential ((score -course rating) x 113/Slope Rating) of each player was regressed against their index (2/15/2013) as shown in the figure below. (Note: If the ESC equations above are multplied by 113/Slope Rating, they become identical in form to the equation shown in  the figure below). 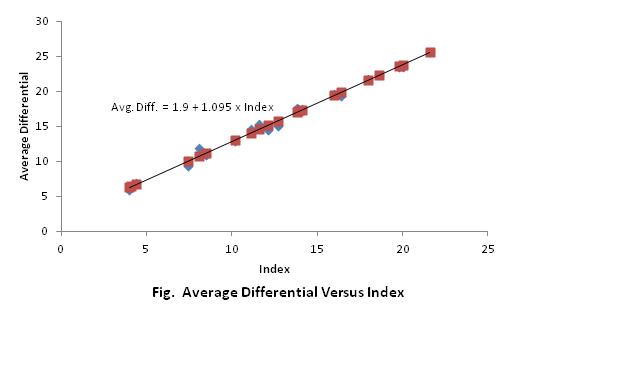 This empirical test shows the low-handicap player has a 9.5 percent edge as opposed to the 8 percent edge predicted by the theoretical model.  Both the theoretical and empirical models, however, predict a smaller edge for the low handicap player than the 13 percent edge assumed in the development of the Slope Handicap System when OLDESC was in force.  Clearly, the small sample size limits the confidence in the estimate of the coefficient (i.e., .095).  Since ESC97 increased the cap on scoring for medium- and high-handicapper players,  a reduction in the edge given to the low-handicap player was inevitable.  Therefore, it is reasonable to conclude ESC97, as opposed to OLDESC, made competition more equitable, but not equitable. How golfers have reacted to this inequity will be the subject of a forthcoming post--In Defense of Sandbagging.


[1] These equations were determined by finding the trendline among three data points.
Posted by Laurence Dougharty at 10:38 AM No comments: