Is Your Tournament Equitable?


Introduction - A golf handicap is a rough measure of a player's ability.  It is not a perfect measure.  It is biased in favor of the low handicap player, biased against a player with a large variance in his scoring, and biased against the player whose scores are trending upward.  Even with these flaws, however, it is probably the best predictor of a player's gross score in a stroke play event.
Many tournaments, however, are played in a format where no scoring data is available.  In a four-ball event, each player may post an individual  score, but the team score is not posted.  There are clearly practical problems with trying to get a team handicap for four-ball events (e.g., not sufficient scores with the same partnership). To get around this problem, studies have been undertaken to examine the relative performance of generic teams.  For example, the USGA believes the teams with the higher combined handicap will do better in four-ball stroke play than teams with lower combined handicaps.  To correct for this inequity, the USGA recommends each player only receive 90 percent of their course handicap (See USGA Handicap System, Sec. 9-4bii).  The 90 percent figure is called an allowance.   A tournament committee has a great deal of discretion in choosing the allowance for a particular format.  That choice will have a large impact on the equity of the tournament.  Typically, there is no ex post facto examination of equity after a tournament is completed.    This lack of analysis only ensures the same mistakes will be made next year.
This paper examines the equity of a tournament to provide an example of what should be done to increase equity.  The exemplar was a two-day tournament with a two-man scramble and four-ball format.  Thirty two teams participated and could select to play from any of three sets of tees with their handicaps adjusted according to Section 3-5 of the USGA Handicap System.  Five areas of possible equity problems are studied: 1) Prize format, 2) Scramble handicap allowance, 3) Four-ball handicap allowance, 4) The effectiveness of Sec. 3-5 in ensuring fairness, and 5) The spread in the difference in handicaps between partners.   A concluding section suggests possible policy and research implications for the United States Golf Association (USGA).


Prize Format – One of the most common prize formats is “Equal Gross and Net.”  Unfortunately, putting “equal” in the title does not make it so. In the tournament in question, three gross prizes and five prizes were awarded.  The three gross prizes went to the three teams with the lowest combined indices. A conservative estimate of their probability of winning a prize, barring a major health emergency, would be between 80 and 95 percent.  This left the five net prizes to be fought over by the remaining 29 teams (i.e., each team in theory had only a 17% of winning a prize). The disparity in probabilities of winning is one measure of inequity. (Equally annoying, but not a problem in this tournament, is giving a gross prize in the B-flight.  This gives an edge to a team who were sufficiently mediocre to miss the cut for the A-flight)


In an ideal tournament, net scores should not be correlated with handicaps.  Fig.1 shows a plot of the net scores versus the scramble handicap of each team.  Net scores and handicaps are highly correlated (R2 = .54).  The linear regression equation predicts that for each one-stroke increase in team handicap, the net score will increase by 1.3 strokes. This explains why the lowest net scores were posted by the three teams with the lowest combined indices. 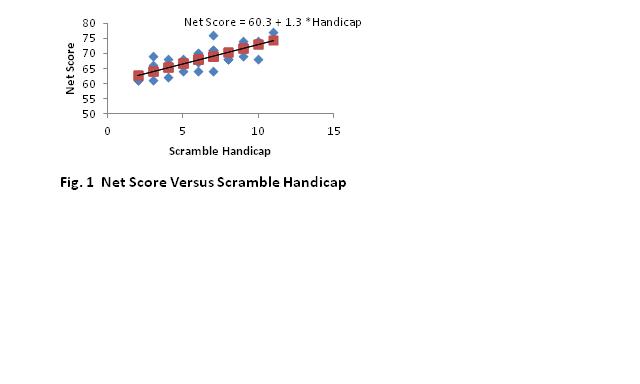 Clearly, the 25,15 allocation was unfair to the high handicap players.  Is there a more equitable allocation?   That is, is there an allocation that reduces the slope of the regression line to near zero?  The USGA suggests a 35,15 allocation.  Using the USGA allocation, the estimate of the slope was reduced to 0.8 for the full sample as shown in Table 1.  Based on this data set, the “best” allocation would be 50,25.  This allocation produces a minimal slope (.2)and the R2 value indicates a team’s handicap only accounts for 14 percent of the variance in net scores.  Because of the small sample size, however, this result only suggests the USGA recommended allocations may be too low and further study is definitely needed. 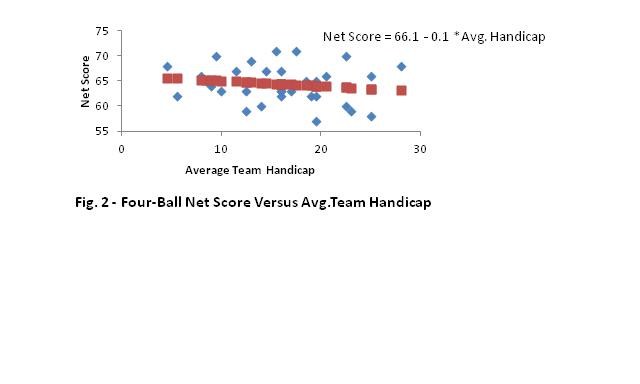 The coefficient for the average handicap variable, however, was not significant at the 95 percent level of confidence.  The finding of bias found here is merely suggestive, and a more definitive conclusion waits upon more and larger samples.


Sec. 3-5 – In this tournament, teams were allowed to complete from any of three sets of tees.  The player’s handicaps were adjusted in accordance with Sec. 3-5.  The assumption was the particular set of tees chosen would not have an effect on the team’s net score.  This assumption is examined for the scramble and four-ball competitions.


The estimated equation was:


The coefficient of the T variable was not significant (t-statistic = -0.17).  This would indicate Sec. 3-5 adequately compensates for the differences in tees.


Four-ball – A similar model was estimated for the four-ball competition.  The estimated equation was:

The equation estimates that playing the longer tees results in a 1.6 stroke increase in the teams net score.  Again, the coefficient of the T variable was not significant (t-statistic = 0.93) at the 95 percent level of confidence.  The equation does suggest, however, that Sec. 3-5 has not equalized competition in the four-ball event.


Limitation on the Difference in Handicaps Between Partners - The USGA is convinced, mainly on the basis of research done in the 1970’s, that the spread between handicaps is an important determinant of net score in four-ball events.  The argument is, for example, that a team composed of a 6 and a 12 handicap is better than one composed of two 9 handicaps.  To examine if the USGA’s assertion is correct, the following model was estimated using data from the four-ball event:

The estimated equation was:


USGA research, however, applies to four-ball events and not to scrambles.  To examine if “spread” was important in scramble events a model similar to that above was employed.  The estimated equation was:


The coefficients of the T and Spread variable were not significant (t-statistic = -.2 and -.1 respectively).  This would indicate the limitation on the difference in handicap between partners may not be necessary for scramble events.  Given the peculiar nature of this tournament (the use of difference tees and a biased handicap allowance), any finding from the scramble event is not much more than conjecture.

Implications for future Research - The limited purpose of this paper was to demonstrate a methodology for evaluating the equity of golf tournaments.  In the course of this research, however, several policy and research questions surfaced that should be addressed by the USGA.


·        The USGA requires clubs to use Sec. 3-5 when players are competing from different tees.  The USGA, however, has not reported any research that proves Sec. 3-5 provides for equitable competition for different formats.  This should be corrected.  Moreover, the USGA should provide guidance on when Sec. 3-5 should be used and when it should be avoided if possible.  The USGA published "How to Conduct a Competition,"  but it is of little help in selecting formats to help ensure equity or in analysing tournament results.


·         The four-ball allowance recommended by the USGA was developed around 1978.  That was 34 years ago.  It seems time to revisit the allowance since there have been changes to the handicap system since then.


·         The USGA only gives a soft recommendation on the allowance for scramble events—i.e., 35,15 seems to work, but you can use anything you want.  The USGA could instruct handicap chairpersons on ways to evaluate the equity of tournaments, as done here, so they are in a better position to select the appropriate allowances.

Posted by Laurence Dougharty at 2:07 PM